Difficulty of the route MTB

From the railway station take, at first Viale Stelluti Scala, then Via Zonghi. Before getting to the public park, turn left on Via Serraloggia until you arrive to Castiglione; where, taking a white road on the left, cross the ridge and then downhill to Paterno. Cycle along the valley floor road until reaching the bus terminal; opposite the bus stop a narrow gravel track leads away from the village through trees, pastures, small gardens and some ups and downs heading to Collamato. Once on tarmac, turn right past the sports ground and onto the provincial road SP15. Bear right again over another crest (km.3.8) and then down towards the Fosso Sant’Angelo; go through the crossroads past which a religious shrine signals another junction. The gravel track smoothly follows the course of the stream keeping to the valley floor among woods and open pastures, passes by the last possible detour on the left, eventually the pastures come to an end. The track steepens up to the pass of Fonte Passera. Head downhill on the left (NW) along a free flowing forest road in the narrow and woody Vallerania until reaching Valleremita. From the fountain at the only crossroads on the left it is possible to head due SO towards the hermitage (ancient Benedictine coenoby that hosted Saint Francis in 1210), or due NE on the right climb the narrow wooded valley on a forest track until the pass between Monte Fano and Monte Linatro at alt.700, then cross the road coming from the pass of Fonte Passera to pick up the CAI trail no. 100. There’s no need to be apprehensive about the steep and bumpy initial descent because after 100 m it becomes a free flowing and enjoyable track that emerges from the thick woods into the large clearing bordered by the pine in Località Colle Paganello, from where you will quickly descend back to Fabriano

The ring of San Silvestro

Challenging route around Mount Fano (where the San Silvestro convent is) and Monte Alto, the first offshoots of the Apennines that overlook the south side of the town of Fabriano.

The diffusion of hermitage is closely linked to the diffusion of monasticism. The rule of Saint Benedict foresaw a division between coenobitic and hermit monks, but San Romualdo further supported this experience, which found in Saint Francis from Assisi its most particular follower. Especially after the year 1000, alongside the reaction to the decadence of religious institutions, strong became the wish to return to the ways of the old Anchorites. A hermit is someone who for spiritual reasons lives a life of solitude and austerity in remote places. Thanks to San Romualdo’s rule, the retreat room (already found in Benedictine monasteries: it was a nearby building where the most ascetic monks would retreat for some time) was transformed. It became a very solitary place, “out of this world” and nearly inaccessible (at times these rooms are caves etched out of rock faces or refuges built in the depths of the forest). For food, the hermit is contented with herbs, mushrooms and berries. San Romualdo, in the spots he chose for monastic settlements, always built hermitages first, because asceticism is extremely important for him. Along the present route we also meet the hermitage of Santa Maria Valdisasso (twelfth century). In Early Middle Ages, this hermitage was a castle belonging to the Lombards but towards the end of the first millennium it became a small coenoby where a small group of Benedictine monks took residence. Given its position it was an ideal place for praying and working (many of the areas surrounding Fabriano, with their woods, hidden valleys, gorges are canyons are perfect for hermitage). Legend has it that Saint Francis, at the beginning of the 12th century, was a guest at the hermitage. As such, it was considered a place of worship and became a reference for the followers of the Saint. The former, at the beginning of the fifteenth century, made it to build a convent at the site. The coenoby later became so well-known to be named “Porziuncola delle Marche”, and in the ‘400s it hosted illustrious Franciscans such as S. Bernardino da Siena and S.Giovanni da Capistrano. During the Napoleonic regime, however, the convent was suppressed and likewise again in 1861 with the unitary state. The hermitage, turned into public ownership, passed from hand to hand over the decades until it became a mere a farmhouse. Only in the second half of the last century could minorite monks go back to live there. 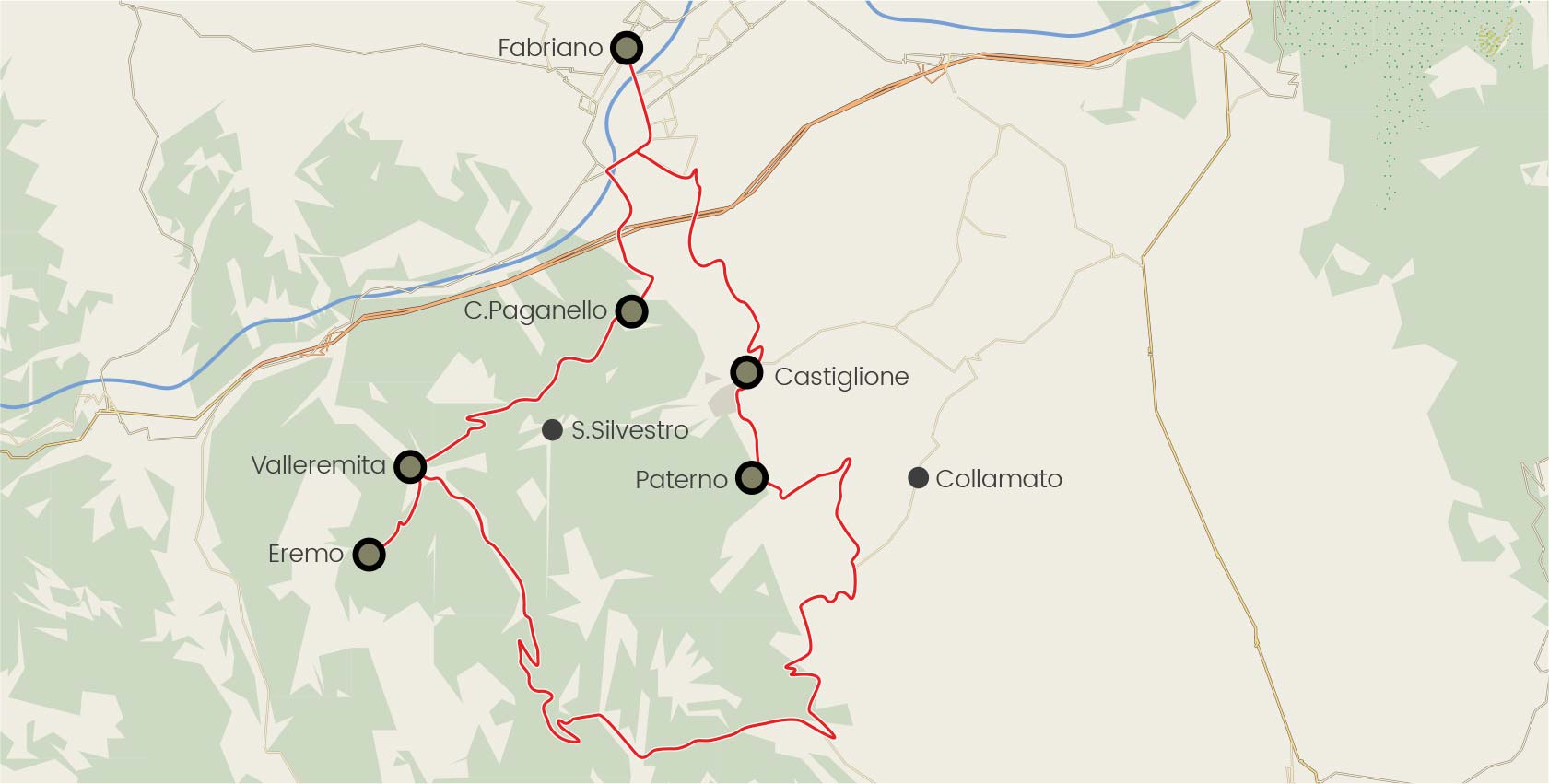 Discover the other routes to be covered by bicycle